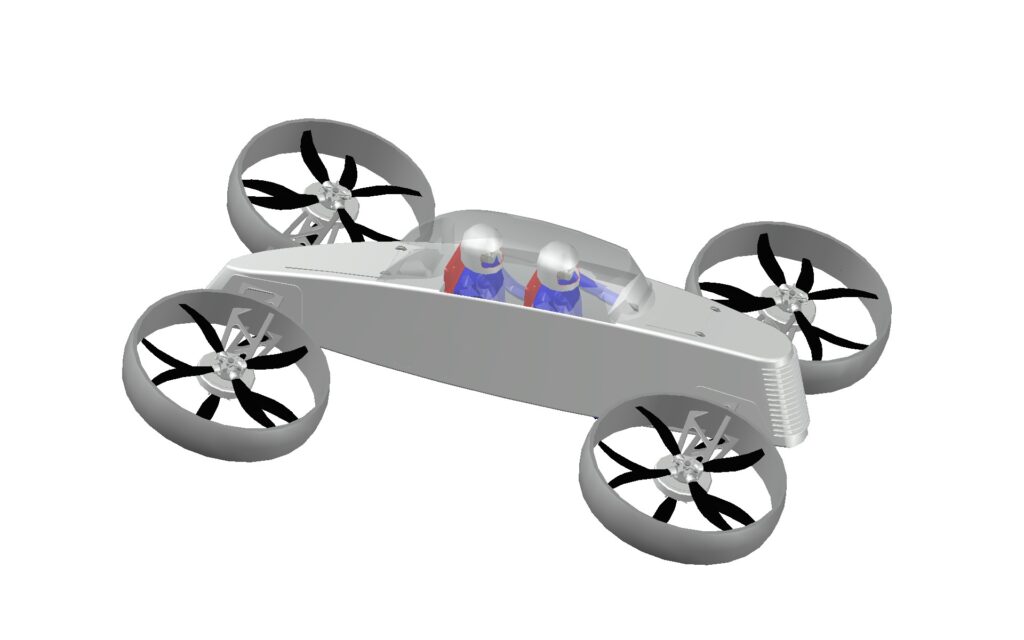 in the “flying boat” version with electric motors

WHAT IS OUR PROJECT BETTER THAN OTHERS

There is nothing new or original about the idea of ​​”enlarging drones” for use as an aircraft for humans!

Now on the Internet there is information about the mass of projects, the creators of which are trying to implement this idea. Almost all of these projects repeat the technical solutions of small drones.

We have come up with a comprehensive approach to solving this problem!

Moreover, unlike many projects that widely advertise themselves in the press, but have nothing but computer images, we really DESIGNED, MANUFACTURED and TESTED:

Videos of real tests can be seen on our YouTube channel – https://www.youtube.com/channel/UCWBKG8SqTNnHoY0jIDAYJGw/videos 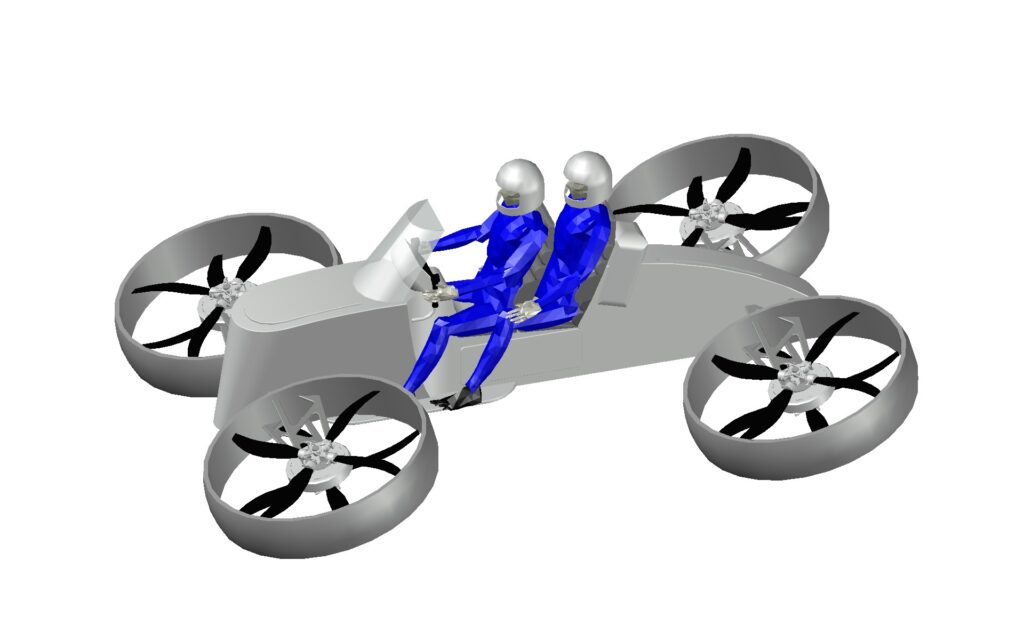 in the version of a flying motorcycle with with electric motors

To ensure a reasonable compromise between controllability, reliability and efficiency, for flight control, we have chosen a scheme with variable pitch propellers.

In fact, we are creating a “universal platform” that allows us to create a device that is most suitable for the user – a PILOTED AND UNMANNED version, with ELECTRIC MOTORS and with INTERNAL COMBUSTION ENGINES (ICE).

It is possible to “assemble” a device with electric motors and an internal combustion engine from the same basic units (flight control systems – a flight controller and electronically controlled propellers).

At the same time, to increase the carrying capacity (if you need not a 2, but a 4-seater version), it is not required to install 6-8-10 or more propellers and motors. The scheme does not change – 4 pitch propellers, you just need to change the diameter of the propeller. 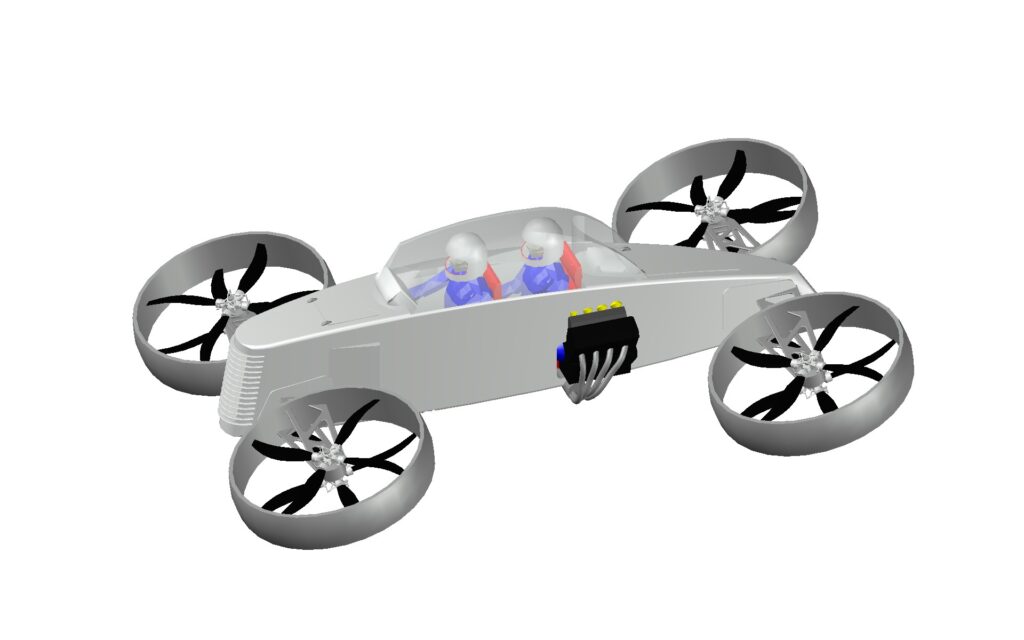 Almost all existing projects of other startups have grown out of the idea of ​​”scaling” ordinary small ELECTRO drones – quadro-, hexa, octo- and other copters.

Therefore, emerging projects have many engines – in the image and likeness of well-flying small drones.

But starting to scale up the drone, the designers are faced with a problem – DRONES DO NOT SCALE !!!

More precisely, the solutions to the problems of small drones are not applicable to large ones.

Because to control a small drone, you just need to change the speed of the corresponding engines.

The inertia of the propellers is in the way!

Therefore, many small electric motors with small propellers are installed.

The problem of inertia (and, accordingly, control) is partially solved …

BUT! .. Other problems appear. But they are not so obvious. At least for now, these are prototypes. Not intended for practical use.

One of the problems is efficiency.

The efficiency of one motor per 100 kW is significantly higher than 10 motors of 10 kW.

Efficiency and thrust of one propeller with an area of ​​10 sq.m. much higher than 10 propellers of 1 sq. m.

That is, when trying to simply increase a small drone using a large number of small motors with small propellers, and so a small amount of energy in the battery is wasted on heating the surrounding air, and not on useful work!

Even for the carriage of one passenger in other projects, it is supposed to use 8-16 (!!!!) motors! 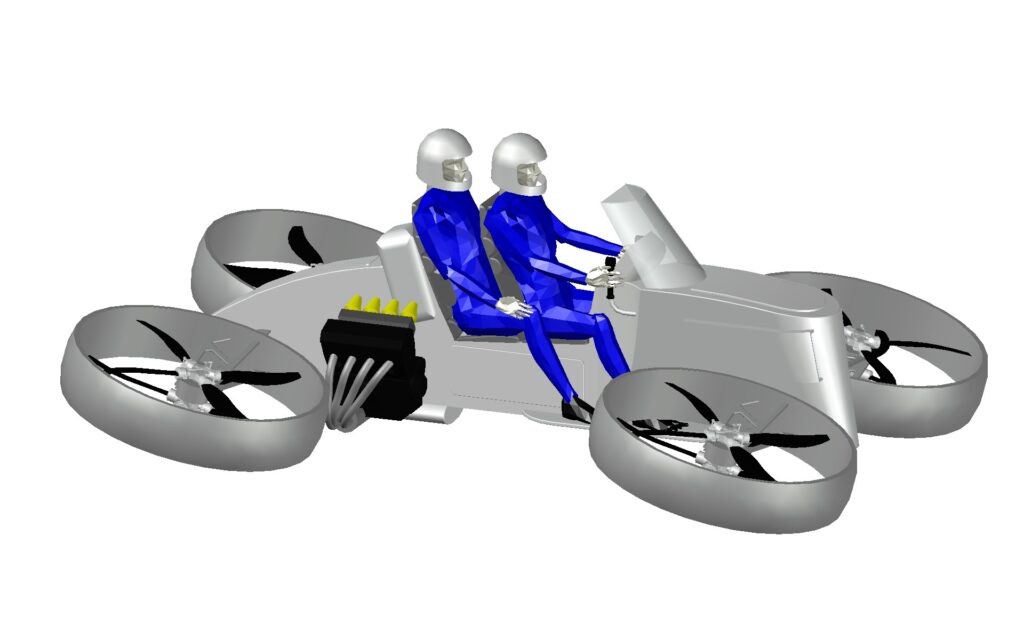 in the version of a flying motorcycle with internal combustion engines

Control of a twin-engine unit is possible when using a variable pitch propeller!

The best option for a “petrol” copter is a twin-engine four-rotor copter with a variable pitch propeller!

This results in a universal scheme with a reasonable compromise in terms of the efficiency of propellers. 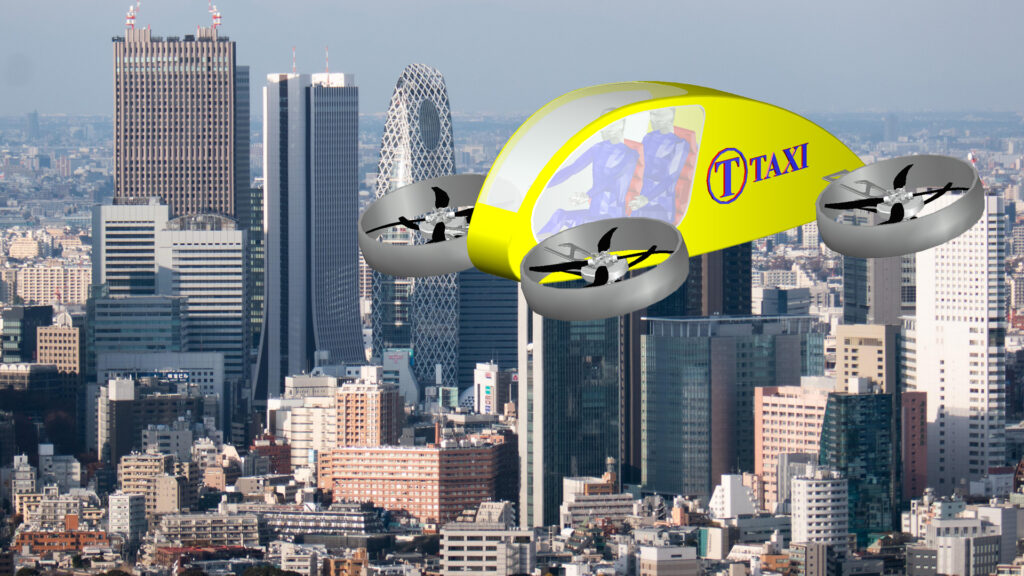 Currently, electric transport is actively and very rapidly developing. The future belongs to him! But you need to fly not tomorrow, but today. And this is where the problem arises.

For the normal movement of an electric car, an electric motor with a capacity of about 100 kW is enough. And the battery capacity of 55-85 kWh is sufficient (considering that the full power of the motor is used only during acceleration) for the operation of the electric motor for 4-6 hours, a mileage of 300-500 km is provided. Which is quite enough in most cases, especially for driving in the city.

For a normal flight of a light aircraft weighing 650 kg, a propeller thrust of 150-200 kg is sufficient, which provides an electric motor with a power of the same 100 kW. But an airplane, unlike a car, flies at a constant power of 70-80% of the maximum. And a 55-85 kWh battery will only last for 30-40 minutes of flight. But this is more or less real.

But for vertical take-off and flight of an aircraft such as a helicopter or a copter weighing 650 kg, a thrust of propellers of 750-850 kg is required! And here the power of the motors is 200-250 kW. Accordingly, a 55-85 kWh battery will only last for 5-10 minutes of flight.

Alas, this is too little for normal use. 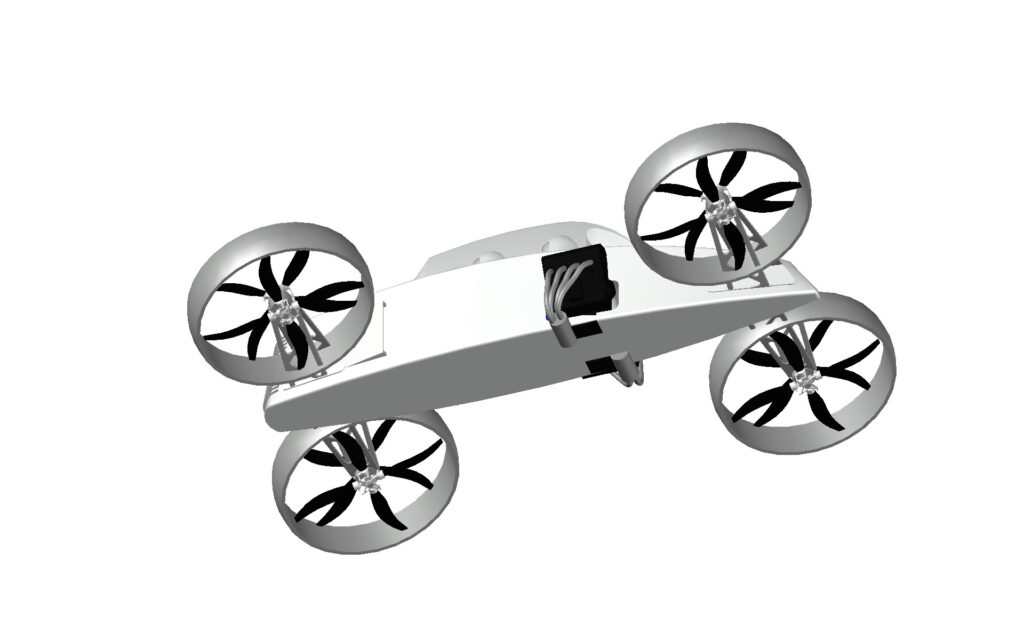 But progress in battery development continues. And by the time suitable batteries appear, the rest of the technical solutions should be ready.

That’s what we do!

In our design, both in the version with electric motors and with internal combustion engines, the same flight control systems (flight controller) and electronically controlled propellers are used.

We have created and tested their design.

Currently, we have created a device with an internal combustion engine. For financial reasons (while we are implementing our project with our own funds, without investors), the purchase of electric motors and batteries is still beyond our capabilities.

But with the availability of funding, as soon as possible, we will make and lift the electrical apparatus into the air. Since the most complex structural elements have already been created by us. 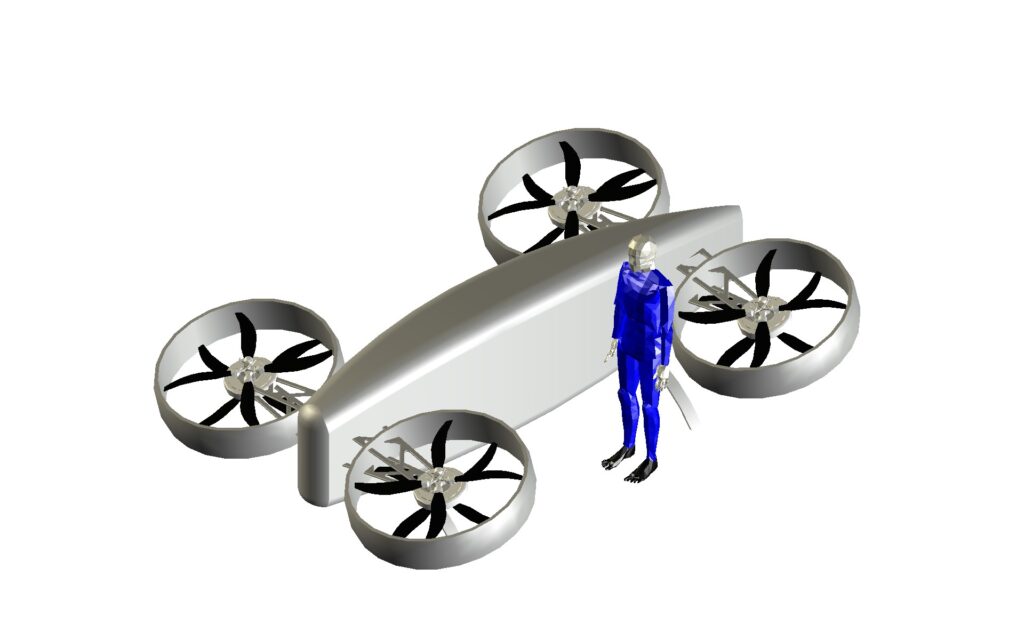 Changing the blade angle by 3-5 degrees is much easier and faster than trying to defeat the propeller inertia. With our scheme, the inertia of the propellers and the transmission is only a plus! Helps maintain constant RPM when the load on the propeller changes during control. 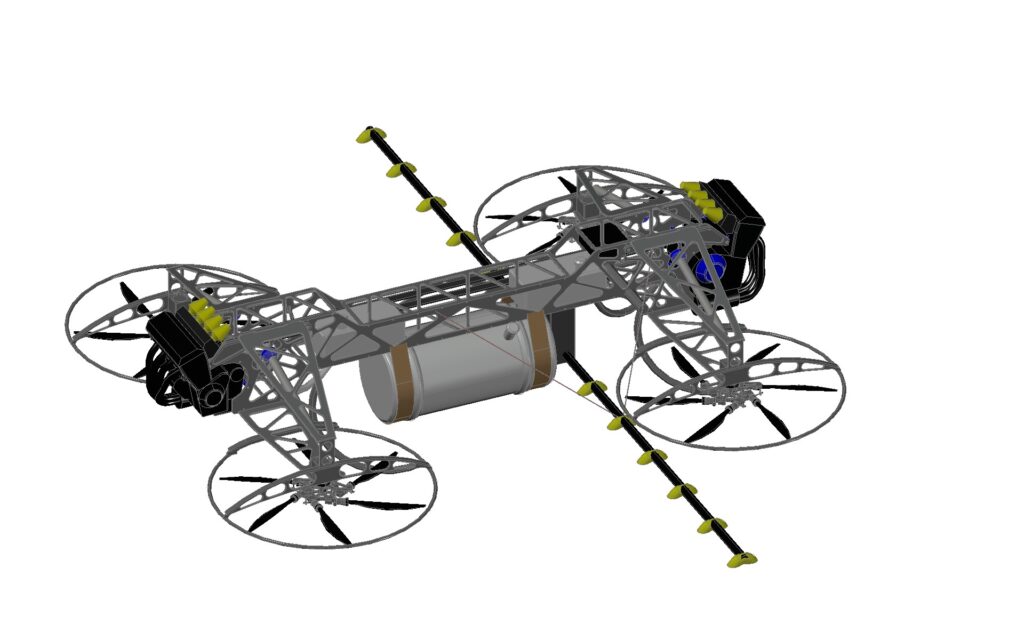 In comparison with existing aircraft, the main advantage of the project is, first of all, the ease of use of our aircraft!

Which allows almost anyone to use it. The absence of the need for a long (and not for all successful) training at a flight school is a significant plus!

(We mean – for successful flights. If in your country it is forbidden to take any aircraft into the air without a license, even for sports and entertainment purposes, then you must decide on the legality of flights in your country yourself).

The use of electronic control makes it possible to foresee the issues of safe operation at the design stage.

Our design allows us to create both manned aircraft, which can be controlled by almost any person, and in an unmanned version.

In the manned version, it is a “closed” and “open” version of the “air boat” and a flying motorcycle, in electric (for short-distance flights – within the city, for example) and gasoline (for flights between cities, for example, for tourism, in sanitary option, patrol) execution. 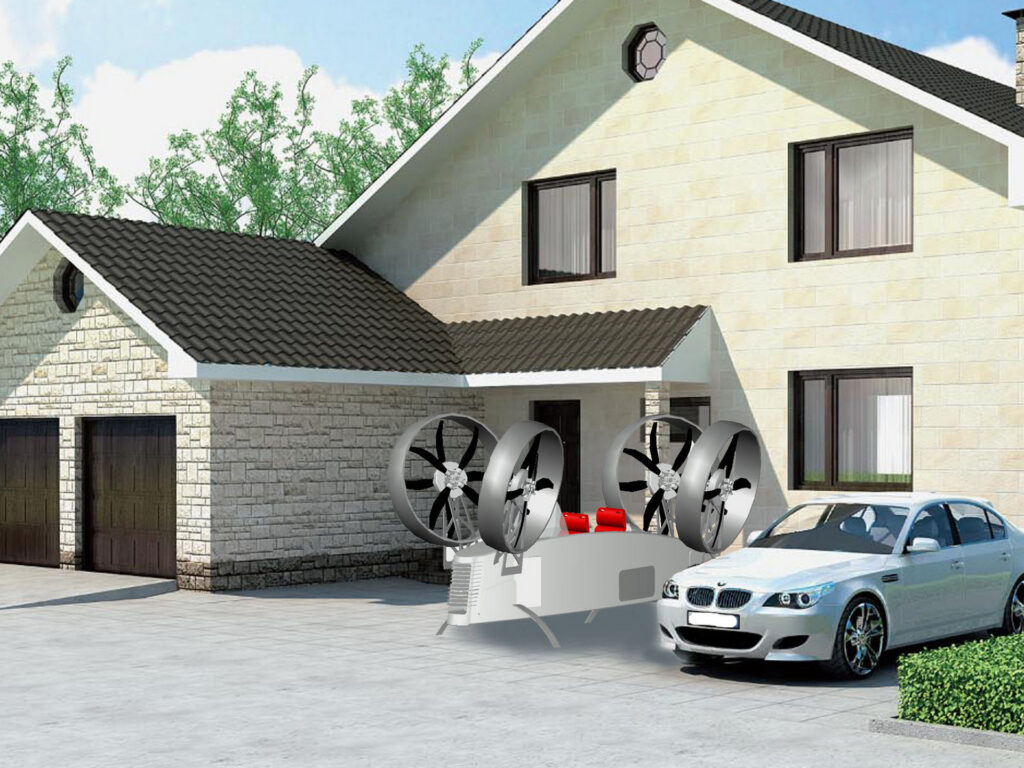 The design of the apparatus provides for folding pylons of propellers, which allows to reduce the dimensions during storage. The folded dimensions of the device make it possible to store it in a regular garage. And vertical take-off and landing – provide the ability to fly directly from home. No need for an airfield, storage hangar. Unlike other “flying cars” projects, there is no need for a trip to the airfield. Since in this case the whole meaning of the flying car is lost. Getting to the airfield and from the airfield through traffic jams is all the same by what – by a regular taxi to a regular plane, or by a flying car that will fly only after reaching the airfield. 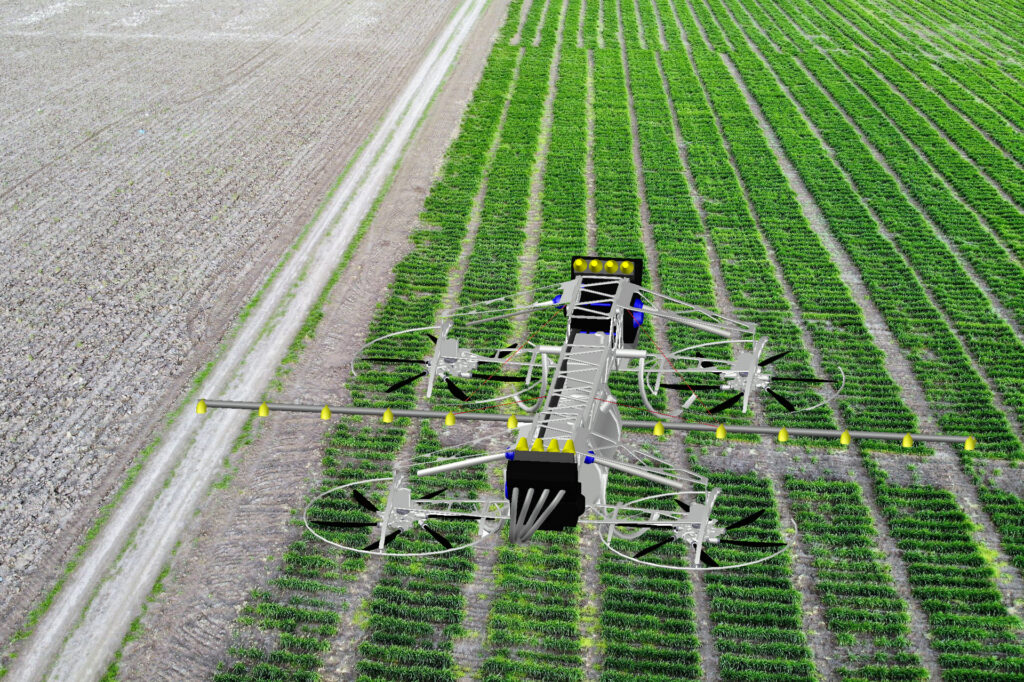 In an unmanned vehicle – for the delivery of goods up to 250 kg., In a patrol or agricultural version (for processing farmers’ fields, for example, for whom the use of large aircraft is economically unprofitable). 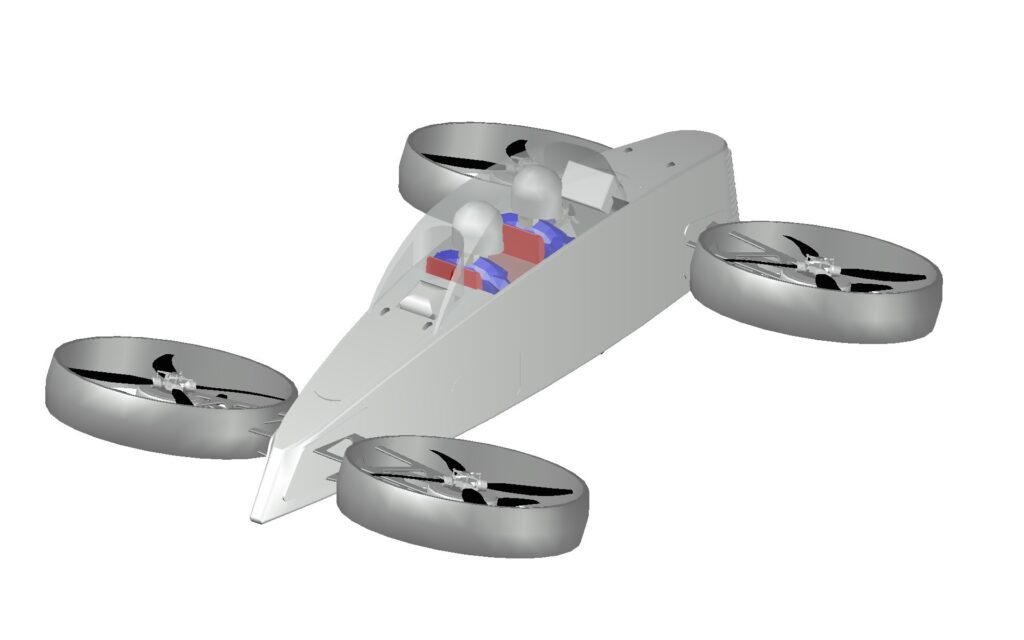 in the “flying boat” version with electric motors

For a safe flight, the reliability of all control systems, especially electronic ones, is important.

We will use a flight controller, which provides for three-fold redundancy of everything, including processors. This will provide the required resiliency.

The flying motorcycle is a 4-screw aircraft equipped with a parachute emergency rescue system (PERS).

The flight safety of the electric version is ensured by the absence of a transmission and the presence of 4 electric motors. If one of them fails, a safe controlled descent for landing is possible.

In the petrol version, there will be two motors to ensure the necessary safety. 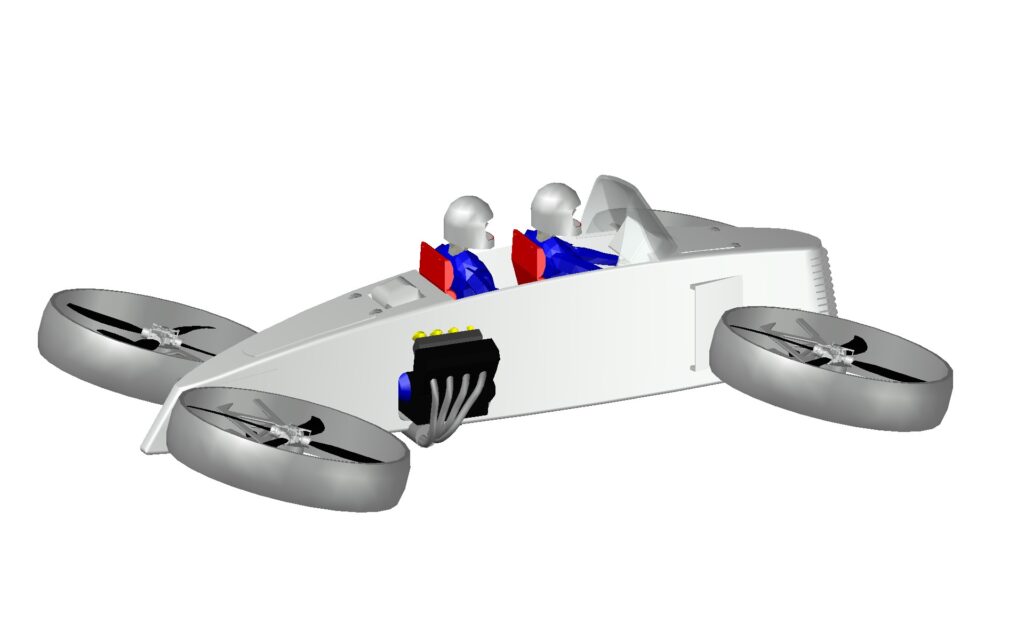 PROBLEMS OF THE PROJECT

Now the main problems of the project are related to financial issues, since we are implementing the project without the participation of investors.

For this reason, we started with the production of a gasoline version, since the electric version, although technically simpler, costs much more components for it – electric motors and a battery of the required capacity. Therefore, we have installed one internal combustion engine on the prototype so far and no parachute rescue system has been installed.

Since the main task of the prototype is to check the main idea and technical solutions – the correct combination of mechanics and electronics – long flights at the stage of adjustment and test flights are not provided. Accordingly, one engine is enough for us for now. 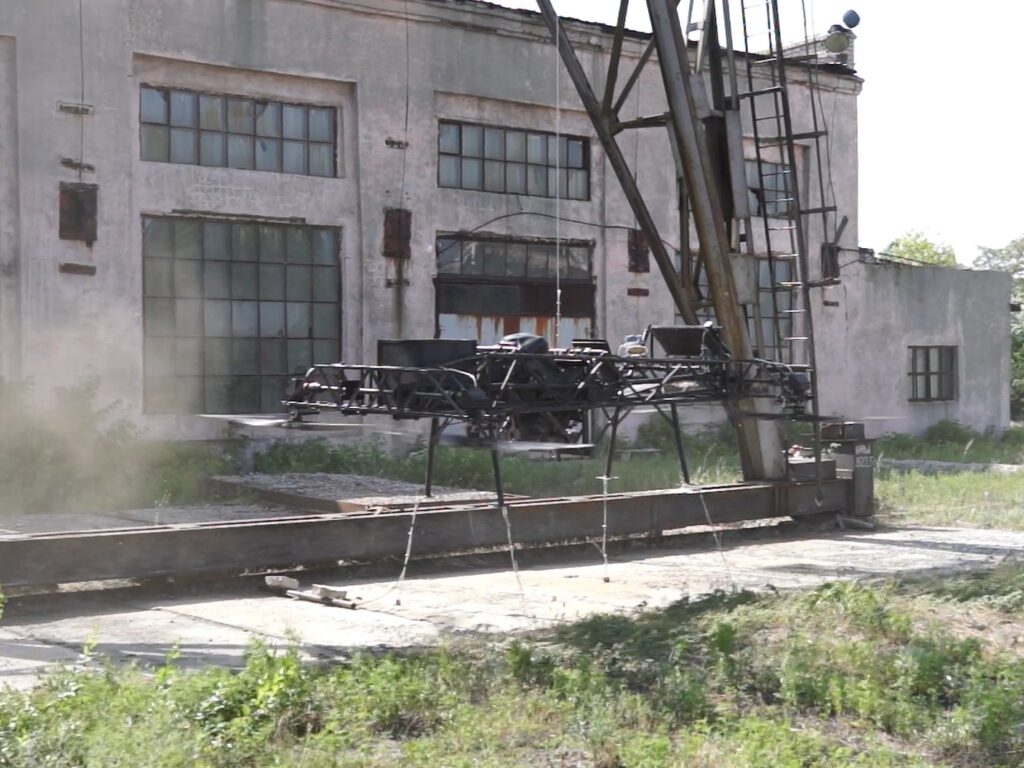 In addition, we are not yet able to create our own dedicated flight controller (for the same financial reasons). On a serial sample, the self-diagnostics and settings should be like on a car – “I turned on the ignition – the control lights came on – when they went out – everything was in order” – you can start the engine and drive.

We want to do this in our flying motorcycle as well.

The technical requirements for the flight controller we need are ready.

As soon as the financial opportunity arises, it will be created and used in our flying motorcycle. 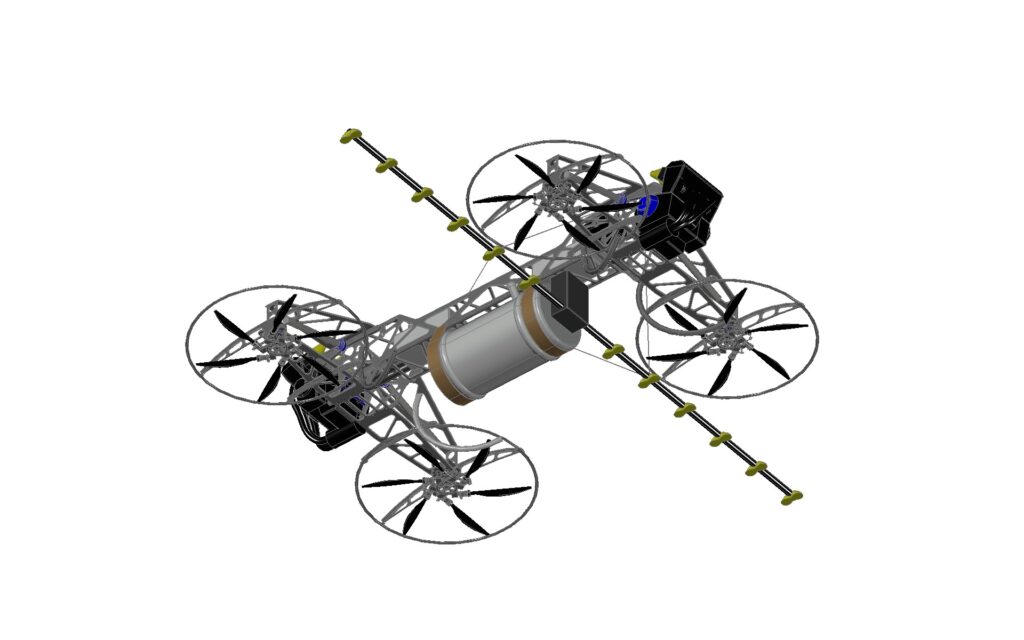 According to press reports, several projects are currently being prepared.
Some of them use original technical solutions.

But most of these projects are in the CG stage. And the technical solutions they propose are in many cases meaningless from the point of view of physics. And they will never fly!

Those projects that offer more realistic options – they all use the simplest scheme – with a small takeoff weight, there are many electric motors with fixed-pitch propellers, control is carried out by changing the speed of the motors. And they are not suitable for further development. For example, if you need to create an apparatus for transporting 4-6 passengers, the number of motors will grow to 30-40!

Therefore, in terms of the totality of operational characteristics (important for the consumer) – payload, flight range, ease of refueling, versatility of use, etc. – our project has no real competitors today.

And taking into account the fact that our project provides for several versions – electric and gasoline, open and closed, manned and unmanned versions – and all this from the same units and components – our project is beyond competition! 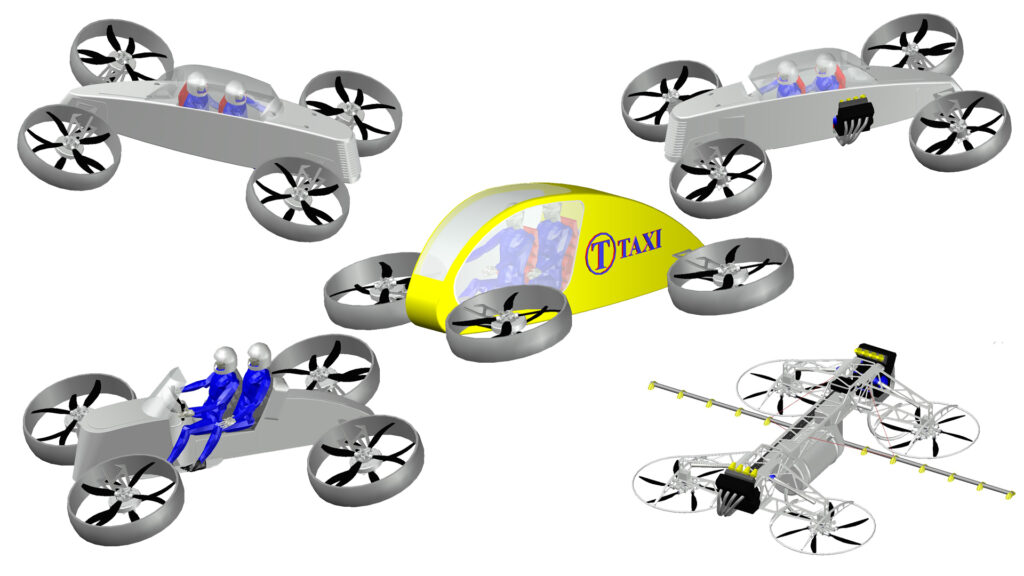